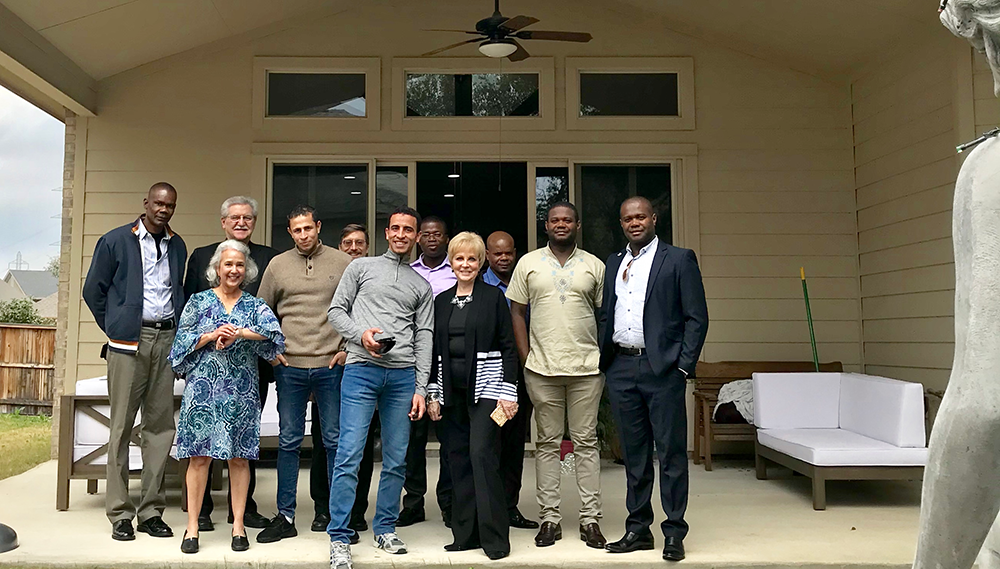 I love to expand my horizons. Texas is known for its big skies, but I’m talking about flavor horizons beyond the curve of the Earth.
One of the most priveldged opportunities that have been offered us is to befriend foreign officers in the the DLI (Defense Language Institute) program at Lackland AFB. When we invite them over my hearts desire is to give them a little bit of “home” cooking.
Like all hastily planned Sunday lunches, we found out the day before we would be adding two gentlemen from Egypt to the officers from Sao Tome, Mozambique, Haiti and a few Americans! I made a nice slow cooked chicken dish that would be similar to Portuguese cooking with Brazilian rice (rice with garlic and carrots) but with the new addition I had couscous and opened up my Middle Eastern Spice cookbook. I found a fantastic Pomegranate  Lamb recipe and a curious spice blend called Dukkah.
Dukkah has almonds, coriander seeds, cumin seeds, sesame seeds, unsweetened shredded coconut, salt and pepper. In researching some put nigella in it. All these seeds/nuts are toasted separately then ground.  After they cooled I ran them through a small food processor. I was absolutely delighted with the nutty fragrance that seemed familiar, but not quite. I put that out to sprinkle on the lamb or whatever.
I did a lot of prep work on Saturday and set things to cook while we were at church. After arriving back to the house I had a lot of help from these guys to put all the food out. Thankfully there was a chef in our midst to guide in the proper way to cook couscous! Tip of the hat to Rami from Egypt! It had been way too long for me to remember and with all the hubbub I was distracted.
Everything turned out tasty. I thought for sure I’d have leftovers, but I don’t think I’ve cooked for so many young men at once! There must have been a combination of good tasting food with big appetites. It definitely made clean up easy!
A few folks have been wanting the Dukkah recipe. Here it is: Dukkah – Egyptian Spice Mix